If you want serious comedy, David Tsonos is not your man. With his friendly and confident persona, he intrigues everyone with his combination of banter and impulsive comments. His comedy stems from being the youngest of five boys, babysitting… his nephews and his cat.

David started off in Canada and, since making the UK his home, he has performed in over 15 countries.

He has appeared at numerous fringe festivals in the UK including Edinburgh, Glasgow, Bath and Hastings and has performed overseas gigs in Bucharest, Dublin, Budapest, Malta, Amsterdam, Antwerp, Prague, Berlin, Guernsey, Oslo, Luxembourg and Brussels.

Very confident and had the crowd roaring. Good face and voice for comedy, great timing.

David has a wealth of jokes and off the cuff remarks. 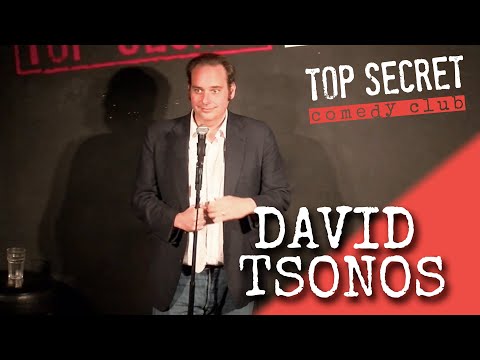